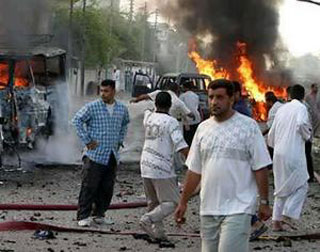 Basra; another milestone in war on terror

“What our police found in their car was very disturbing – weapons, explosives, and a remote control detonator. These are the weapons of terrorists. We believe these soldiers were planning an attack on a market or other civilian targets.” Sheik Hassan al-Zarqani, spokesman for the Mehdi Army

By Mike Whitney
09/24/05 “ICH” — — We are only interested in one thing regarding the melee that broke out in Basra following the arrest of two British commandoes on September 20: whether or not the car they were driving contained explosives? The answer to that question could decide the future of Iraq as well as the fate of Bush’s war on terror. Nothing should deter us from getting to the bottom of this crucial question and no extraneous fact or fiction should divert our attention from uncovering the answer.

If it can be clearly established that there were explosives in that vehicle then we can say with some degree of certainty that the wave of terrorism that is spreading across Iraq is, at least, in part the work of British and American Intelligence. That would imply that current counterinsurgency efforts now involve the premeditated killing of innocent people to achieve the stated policy objectives. This is the very definition of terrorism.

Early news reports from both the BBC and the Washington Post confirmed allegations that bomb-making material was discovered in the captured vehicle. The Post’s Ellen Knickmeyer stated, “The Iraqi security officials on Monday variously accused two Britons they detained of shooting at Iraqi forces or TRYING TO PLANT EXPLOSIVES.” (Washington Post, 9-20-05; “British Smash into Jail to Free Two Detained Soldiers) Neither the Post nor the BBC have printed retractions or clarifications on this story even though it has swept across the internet with a fury not seen since the Downing Street memo. In fact, this story is significantly more important. The entire war on terror is predicated on the belief that the murdering of innocent people cannot be rationalized. The incident in Basra puts all that into question.

Bush has marshaled the public fear from 9-11 into a rallying cry for his global-onslaught. He has waved the bloody-shirt of terror to enhance his power as executive and declare a permanent state of war. Terror has provided the foundation for savaging civil liberties, imprisoning American citizens, and acting with complete impunity.

“The deliberate and deadly attacks which were carried out on September 11 were more than acts of terror. They were acts of war”, Bush boomed. The powers of the “war president” depend entirely on his nebulous war on terror.

The same is true for Tony Blair. The British PM has acted-out the same rituals as Bush; railing against the “evil ideology” of Muslim fanaticism saying, “We must confront and deal head on with the extremism that is based on a perversion of the true faith of Islam.”

Blair’s fulminations have resulted in the most extraordinary attack on civil liberties in the last 100 years. His pretentious rhetoric has produced a de facto state of martial law for Muslims living in England.

Now his muddled justification for endless war and butchery is facing its greatest challenge; a Ford Cressida packed with a trunk-load of explosives on the streets of Basra. If proof emerges that the car contained bombs then Bush’s war of terror will fall apart like a mobile home in a Texas hurricane.

The Chinese news service Xinhuanet reported that, “A police patrol followed the attackers and captured them to discover that they were two British soldiers. The soldiers were using a civilian car packed with explosives.” (Xinhuanet 9-20-05) The same basic story appeared on Syrian and Turkish TV, and in other news reports in the Gulf States.

The Washington Post’s foreign office filed a similar report by Jonathan Finer stating that, “Monday’s clashes stemmed from the arrest by Iraqi police on Sunday of two Britons, WHOM IRAQI POLICE ACCUSED OF PLANTING BOMBS”.

And then there was this from Syrian correspondent in Baghdad Ziyad al-Munajjid:

“Many analysts and observers here had suspicions that the occupation was involved in some armed operations against civilians and places of worship and in the killing of scientists. But those were only suspicions that lacked proof. The proof came today through the arrest of the two British soldiers while they were planting explosives in one of the Basra streets. This proves, according to observers, that the occupation is not far from many operations that seek to sow sedition and maintain disorder, as this would give the occupation the justification to stay in Iraq for a longer period.” Abdel al-Daraji, Muslim cleric in Baghdad told the UK Telegraph that “Britain was plotting to start an ethnic war by carrying out mass-casualty bombings targeting Shia civilians and then blaming the attacks on Sunni groups.“

“Everyone knows the occupiers agenda”, said al-Daraji. “Their intention is to keep Iraq an unstable battlefield so they can exploit their interests in Iraq.“

Whether the reports are accurate or not is almost irrelevant. They feed the widespread dissatisfaction with the occupation and contribute to the conspiracy theories that animate the national discourse. The belief that the British and American black-ops are behind the violence has captured the popular imagination and will be impossible to dispel. The damage to the occupation is incalculable.

As the story spreads through Iraq, support for the al-Jaafari government is certain to wane and the Shi’ites will increasingly drift towards the resistance. The occupation leaders will have to devise a strategy to restore confidence in their legitimacy or face the steady erosion of support. If that proves to be impossible, then we’re bound to see more radicalized Shi’ites entering the rival camp. A massive movement of Shi’ites into the resistance would pose a serious challenge to the ongoing American-British presence.

The Basra incident is a fatal blow to the Pentagon’s narrative of foreign terrorists stirring up trouble in Iraq. The military depends heavily on the al-Zarqawi myth to feed public fears and divert attention from a brutish occupation. From this point forward every terrorist bombing and random act of violence will be scrutinized as (potentially) the work of British or American agents.

How can Bush and Blair hope to allay the suspicions of Iraqi people after Basra?

What can they possibly do to rebuild faith in the stated goals of the occupation?

The Basra incident is another milestone in the faltering war on terror. The questions that emerge are fundamental to understanding whether we are engaged in a noble effort to liberate and democratize the Iraqi people, or complicit in the deliberate murder of innocent civilians.

If the car driven by the two commandos was loaded with explosives, then we can assume that it would have been used to kill civilians.

Why does this surprise us?

We’ve already seen the “Shock and Awe” invasion that cost tens of thousands of lives. We’ve already seen the horrific photos of tortured and sadistically abused prisoners at Abu Ghraib. We’ve already heard the news of the 200 prisoners at Guantanamo who are starving themselves to death under the Pentagon’s watchful eye. We’ve already chronicled the calculated destruction of Iraqi society and the daily assault on their main cities. We’ve already read of the use of napalm, cluster-bombs, unidentified chemicals and other banned weapons on civilian enclaves. And, we’ve already noted the growing number of young Sunni men who bob-along the Euphrates River after being shot in the back of the head by the CIA-trained goons at the Interior Ministry.

Is it so hard to believe that Special Forces are now directly involved in attacks on civilians?

Aren’t we seeing the logical extension of a policy that rejects all ethical and moral constraints? A policy of absolute barbarism?