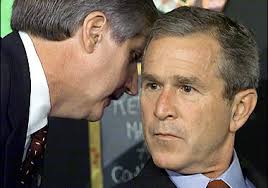 04/02/05 George W. Bush is a murderer, and a prolific one at that. He has deployed surrogates to kill more than one hundred thousand Iraqi civilians in a ruthless slaughter that is ongoing. The fact that he murders via remote control from the Oval Office does not confer legitimacy to his crimes. If anything, it makes them all the more despicable.

Bush is slaying people in the name of democracy, yet his commitment to democracy has already been debunked in Haiti and Venezuela, not to mention Florida and Ohio. Recently released State Department papers reveal that the former Texas governor is murdering Iraqis for the purpose of stealing their oil, which was always obvious and is now documented. There may be worse motives for killing people than thievery, but none leaps immediately to mind.
The level of cruelty involved in this theft is awe-inspiring. At Bush’s behest, the United States military has “neutralized” unarmed Iraqis by dropping cluster bombs on them, showering them with napalm, shooting them from helicopters, executing them in mosques, and torturing them in dungeons. The BBC broadcast an interview with a grieving woman whose pregnant daughter had been machine-gunned by U.S. troops, which is the one method of abortion that conservatives are willing to tolerate. As the corporate media turns a blind eye, Bush is massacring human beings who pose no danger to America.

The corpses of husbands and wives and their children decorate the Iraqi countryside courtesy of the family values president, an evil man whose malevolence provokes nary a discouraging word from the American political/journalistic establishment that avoids the truth as though it had leprosy. Viewed from the perspective of our nation’s high profile opinion makers, the Bush performance has been exemplary. He is being lauded for courageously pressing the cause of Middle East democracy while those who were less stalwart dithered. He is being congratulated for disregarding the vicissitudes of earthly opinion in order to do God’s work. Most surrealistically, he is being praised for his wisdom, which consists of making horrendous decisions and refusing to amend them.

No matter how assiduously his courtiers attempt to swaddle him in virtue, our commander-in-chief is a Hun. Bush is not stealing Iraqi oil to enhance American national security. He is plundering a conquered land to enhance petroleum industry profitability. The carnage in Iraq isn’t some horribly misguided attempt at patriotism. It is homicidal mercantilism, the use of the American military to help Exxon Mobil exceed quarterly earnings projections. While killing people for profit constitutes a competent job performance on the part of a mafia hit man, it reflects less favorably on a President of the United States.

This remains true even when journalists laud the murder of Iraqis as being heroic. It is important to remember that whether they are openly conservative or pretending to be liberal, every one of America’s prominent media personalities feeds from the corporate trough. Consequently, their views represent the consensus of big business, and facts that interfere with the goals of conglomerates are finessed or ignored. It is a gentlemen’s agreement, absent the gentlemen. Since Bush is an acolyte of Corporate America, and mainstream journalists are acolytes of Corporate America, any intramural squabbling among them is subordinated to the common cause of redistributing the world’s wealth upwards.

Redistributing wealth is exactly what Bush is doing in Iraq. Through the persuasive power of overwhelming military force, he is taking oil from primitives who are hardly equipped to handle oppressive wealth and giving it to sophisticates who specialize in these matters. Those primitives who object to this strategy are being raped, tortured, and murdered for the greater good.

In the United States, the greater good involves enriching the corporate ruling elite that consists of multinational conglomerates whose sole allegiance is to money. Despite the elaborate charade of representative government, corporations currently determine policy for America just as the Communist Party did for the Soviet Union. The corporate politburo is more sophisticated than its Bolshevik counterpart in that dissent is tolerated, but only as long as the dissent is ineffectual and in no way imperils the status quo.

Corporations exercise de facto control over the American economic system through functionaries like Alan Greenspan, whose every move during his long reign as Chairman of the Federal Reserve has been designed to transfer money from workers to their employers. Due to monetary policies favoring capital over labor, multinational conglomerates now own a majority of American assets, and aggressively wield the clout that accompanies phenomenal affluence.

Big business dominates the political system by financially underwriting both major parties and supervising them with an army of lobbyists. It also regulates the minds of the American people through a media monopoly that guides the voting public to appropriate conclusions. On those rare occasions when the public fails to conform, the desired leader can be installed by the corporate-controlled judiciary. The result is a nation replete with inspiring verbiage about egalitarianism, but one that operates based strictly on commercial interests.

At the founding of the United States, corporations did not exist, so James Madison couldn’t include them in the system of checks and balances that he believed was necessary to maintain freedom. Less than a century after the Constitution was ratified, John D. Rockefeller began the destruction of American democracy by forming Standard Oil, which became the first multinational conglomerate. Rockefeller declared that the day of individuality was dead, and that business alliances would ultimately rule the land.

Tragically, he was prescient. Although there were efforts to stem the tide towards corporate control of society, it was not long before President Calvin Coolidge had declared that the business of America is business. With each passing year, the political power of corporations has increased at the expense of individual Americans, to the point where democracy in the United States is now a concept rather than a precept.

Modern America has become a subsidiary of the Fortune 500. The consequence is a social ethos of amorality that stems from existing solely to accumulate wealth. When making money is the only standard, what inevitably follows is decadence. It is obvious to those who are paying attention that barbarity, not democracy, is what we have exported to Iraq.

Relatively few Americans are paying attention because we have been indoctrinated to accept unquestioningly the rectitude of our nation’s actions abroad. We are therefore deeply offended when foreigners react negatively to our insistence that anything we do is justified because if it weren’t justified we wouldn’t do it. People around the world somehow fail to appreciate that America is infallible. They seem to think that our country should abide by formalized rules of conduct.

Such apostasy is not an acceptable part of our domestic discourse; it is dismissed as being disloyal at best, and most likely seditious. The presidential candidate of the so-called opposition party did not condemn the incumbent for authorizing the torture of Iraqi children because that condemnation would have been regarded by the electorate as un-American. In a society controlled by corporations, decency is considered to be subversive.

Americans now regard corporate control as being the natural order of things and support an acquisitive foreign policy as long as it is adorned with patriotic rhetoric. Internationally, business interests lack the stranglehold on public opinion that they have in the United States. Most citizens who live in countries where corporations are less influential have no problem perceiving that Bush has liberated the Iraqi oil fields instead of the Iraqi people. Moreover, foreigners are extremely dubious that future corporate plunder will be limited to Iraq.

They should be skeptical because Corporate America is running scared. Unlike the vastly overrated Soviet Union, China poses a real threat to American superiority. Soon, the People’s Republic will supplant the United States as the nation with the most powerful economy. With their tremendous natural resources, well-educated management class, and vast workforce of skilled cheap labor, the Chinese possess overwhelming advantages. Given the respective growth rates and debt burdens of the two countries, unless something unforeseen occurs China will eventually dwarf America economically. In order to compete, American-based corporations are going to need help.

Towards that end, Bush has overthrown the dictatorship of oil rich Iraq and has attempted to overthrow the democratically elected government of oil rich Venezuela. The theocracy of oil rich Iran may or may not be next, but regardless there will be more aggression against nations that are unfortunate enough to have something the corporate brigands covet. Financial muggings will also be conducted on the sly – Bush is placing Paul Wolfowitz in charge of the World Bank so that conglomerates can better benefit from the economic extortion of those countries that own things worth stealing.

With an Asian juggernaut looming on the horizon, the American establishment is desperately trying to forestall the inevitable. The asinine Bush Doctrine stipulates that the United States will forcibly prevent any nation from challenging our military supremacy. This hollow threat is aimed specifically at the Chinese, because if history is any guide their future economic primacy will be followed soon thereafter by military primacy, allowing China to supplant the U.S. as plunderer supreme.

There is little chance that Bush will attack the People’s Republic, which is underwriting much of America’s staggering debt and could sink our economy merely by manipulating its own currency. Instead, he will continue to prey upon weak nations, hurriedly confiscating their wealth prior to Chinese ascendancy into dominance.

In the process, George W. Bush is going to kill those hapless souls who get in the way. Bush is a corporate assassin, and murdering defenseless people on behalf of robber barons is the one task that he performs well. This is not what the Founders had in mind when creating the presidency, but they had no way of knowing that Madison’s dream of a social democracy would be eclipsed by Rockefeller’s dream of a business dictatorship.