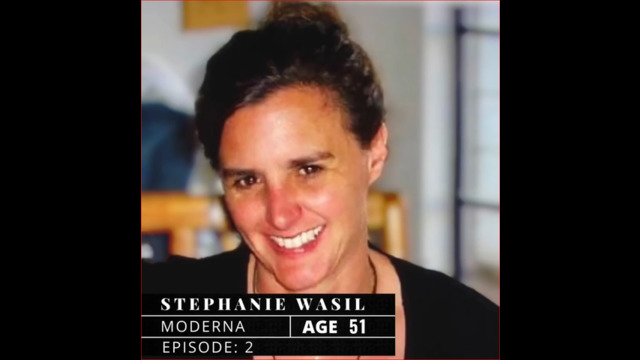 ARROYO GRANDE, CALIFORNIA — A 50-year-old educator and mother of two is dead after being pressured by her employer to get injected with experimental biochemicals.

Ms. Stephanie Wasil received her first dose of Moderna experimental mRNA on March 5 at a local CVS pharmacy, Mr. Zach Wasil, her ex-husband and close friend, told The COVID Blog. She suffered no apparent adverse effects from the first shot.

Stephanie was against masks, social distancing and vaccines throughout the so-called pandemic. But her employer, Lucia Mar Unified School District, started pressuring and “strongly suggesting” that all personnel get the shots. Further, both of Stephanie’s daughters, ages 21 and 18, her parents and several friends received the shots and all seemed fine.

Despite being extremely hesitant to get the second shot, Stephanie caved and did so on April 2. The adverse effects were immediate and severe.

Ms. Wasil suffered from a 104 degree fever, extreme fatigue, debilitating headaches, nausea and loss of appetite within hours after the shot. All of the symptoms persisted for the next eight days. Stephanie called 911 on April 10 and sent Zach, who is also her business partner and the father of their two daughters, a one-word text message – “help.”

Zach arrived at Stephanie’s place within minutes. She was on the floor writhing in pain. By the time paramedics arrived, Stephanie was fighting for her life. She could not breathe and started panicking before losing consciousness. Medical personnel performed CPR in the ambulance and at the hospital for a total of three hours. But they could not keep her heart pumping. The continual chest compressions broke Stephanie’s ribs.

Doctors informed Zach that even if they did revive Stephanie at that point; she would have permanent brain damage. Doctors got her heart pumping momentarily and performed a CT scan. They found a “large lump” inside her stomach.

I can’t seem to beat this [temperature], I have no energy and can barely walk 10 steps without having to rest, goddamn this [vaccine]!! Feel like I have COVID or the results of the vaccine. I don’t know but it feels like I’m dying. I hope I am ok.

Stephanie passed away Saturday morning, April 10, three hours after arriving in the ER.

Stephanie’s death certificate says she died from complications of thromboemboli. The family had a forensic autopsy done. The lump in Stephanie’s stomach was deemed to be gut-associated lymphoid tissue. It is part of the body’s immune system that protects against foreign pathogens and invaders.

Ms. Wasil had blood clots in her lungs that ultimately caused a heart attack. The San Luis Obispo County Coroner refused to list the Moderna shot at all on the death certificate. Zach said the first mortician refused them service due to the fact the Moderna shot was involved and the family is very adamant about making that clear. Now all Zach and the family can do is hope for justice and accountability.
“I have learned so much. It’s a bit much, like they are trying to kill us all for real,” he told The COVID Blog. “The lawyers just say there is nothing that can be done because the Big [pharmaceutical companies] covered their butts on this thing.”

Stephanie was a free-spirited, big kid at heart. She loved Halloween and would have been just fine if the holiday was a 24/7/365 event.

Stephanie and Zach were not the typical divorced couple. They were close friends, business partners and parents. Zach even posted about Stephanie’s Moderna death on his business website. He also created another web page dedicated solely to telling Stephanie’s story. Zach said he cannot help to wonder if something bad may happen to his daughters after witnessing Stephanie’s death.

“I worry about it a lot,” Zach said, “It’s very stressful waiting for another call of emergency either from latent effects of the vaccine or just full-blown breakdown, I don’t know.”

A GoFundMe page is collecting funds in memory of Stephanie, and will benefit their two daughters.