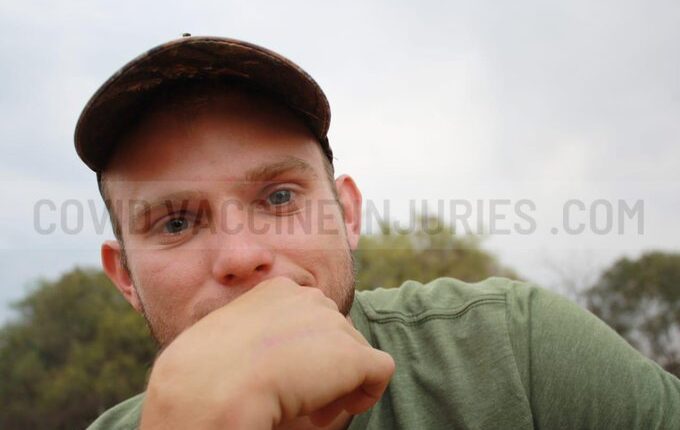 This is his story:

My son Arthur, who was only 22, had his first and only dose of the Johnson & Johnson COVID Vaccine on January 18, 2022, as a requirement of a work visa for the United States. I didn’t approve of him getting the COVID Vaccine.  The only reason he got it was because it was required to work abroad in America.

The day after the vaccine his nose started running and he did not feel well.

He had episodes of vomiting and February 13th, 2022 was his last ‘healthy’ day. His health deteriorated very, very fast his last weeks.

He died February 24th, 2022, just 6 weeks after his first and only Johnson & Johnson vaccine dose.

He complained he could not sleep since he got the vaccine, that his brain did not switch off, and he felt strange.

He went to the Doctor where they treated him for a stomach ulcer. He was vomiting the whole time and severely dehydrated with severe stomach pain.

I took him back to another Doctor a few days later, and told him he had the vaccine. He had a stomach x-ray that determined there was no movement in his bowels. They treated him for paralytic ileus. This is a condition that occurs when the muscle contractions that move food through your intestines are paralyzed.

The hospital released him to come home, but on a liquid only diet. I took him back to the hospital twice after his paralytic ileus diagnosis.

My son had difficulty swallowing, he could not eat, he had no stools, he stomach was protruding and he was still vomiting. His whole body was shutting down, his kidneys, brain, etc. He looked like a cancer patient.

My son died in my arms.

The first picture below was his normal healthy self. The second picture was 2 days before his death. He was severely dehydrated and his body was
shutting down.

We are still waiting for the pathology report as all organs was sent for histology.