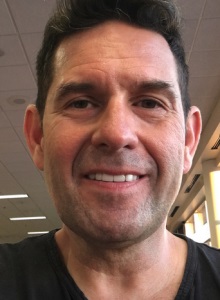 Mr. Thomas Senzee, aka Thom Senzee, worked as a journalist and freelance writer for over 20 years, according to his Huffington Post bio. Nearly all Senzee stories and online bios mention something about “LGBT.” Mr. Senzee announced in December 2020 that he would be rolling up his sleeves for the experimental injections as soon as possible. He reasoned that receiving the injections is “logic[al],” despite no long or even credible short-term studies about safety and effectiveness.

His first Pfizer mRNA injection came sometime in March 2021. Mr. Senzee was so excited about the second injection that he announced it twice before receiving the shot on April 23, 2021. He captioned the band-aid photo, saying he “can’t wait for faster download speeds.”

Mr. Senzee utilized a lot of word salads to appear enlightened and non-judgmental against the non-vaccinated. But the strategy was ineffective. He said in late October that wearing masks is “our responsibility” and then compared experimental mRNA gene therapy to measles and mumps vaccines from the 1970s.

British singer Eric Clapton had severe adverse reactions to an AstraZeneca viral vector DNA injection last May. He starting warning others about the risks and what he experienced after the shot. Mr. Senzee referred to Mr. Clapton as “#coocooClapton” and an “anti-vaxxer nut” for telling the truth about his adverse reactions.

Mr. Senzee then denied thriving on schadenfreude, while saying the non-vaccinated need to “heal…mentally.”

He then insinuated that “my body, my choice” only refers to abortions, and not the experimental injections and masks.

Another pattern we’ve seen in nearly all of these LGBT virtue signaling cases is unabashed, universal Fauci worship and obedience.

Of course Fauci is responsible for upwards of 300,000 homosexual American deaths with his promotion of and profiteering off the poisonous HIV drug AZT in the 1990s.

Finally, right before the New Year, on December 27, Mr. Senzee blamed the non-vaccinated for his obsequiousness and obedience to government, mainstream media and big tech.

It’s unclear if or when Mr. Senzee received a booster shot. However, we’ve cited surveys by the Human Rights Campaign (HRC) Foundation several times on this blog.

The HRC, known as the “largest LGBT rights organization in the United States,” found last August that 92% of American adults that identify as LGBT were fully-vaccinated. HRC updated its data and released a new report on March 24. It found that 96% of LGBT American adults have either already received a booster shot, had a booster appointment set, or planned to set an appointment in the very-near future. Thus it’s safe to surmise Mr. Senzee was triple-vaxxed.

The Blade reported that Mr. Senzee was found dead in Palm Springs on March 24. Another LGBT publication described his death as “tragic and unexpected.” Note that Mr. Senzee averaged about five tweets per day from January 2021-22. That dropped to about one per day in February. He tweeted only twice in March, with the last one coming on March 16.

The Riverside County Coroner said in a statement that the cause of death is undetermined, pending further investigation. There was a GoFundMe page created on March 30 with a goal of raising $6,700. The beneficiary was listed as Barbara Senzee, who appears to be Mr. Senzee’s sister. But the page, with only half of its goal met, now says it is no longer accepting donations.

There are no further updates as of publishing.