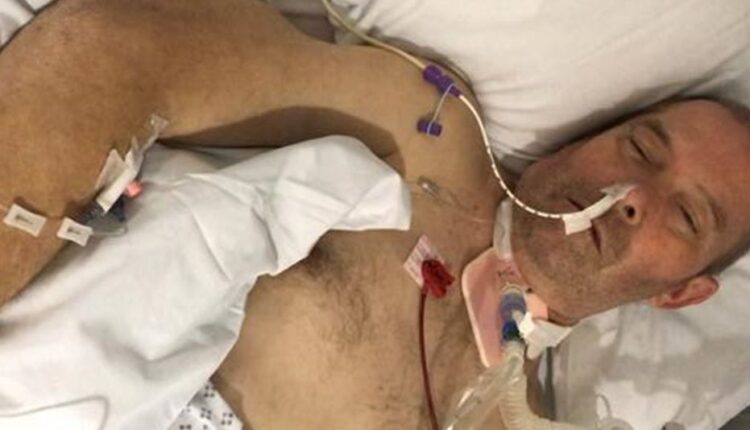 A week after his first dose of the AstraZeneca Covid-19 vaccine in March last year, the unthinkable happened to Richard Todman. The 60-year-old part-time employment judge from North London suffered catastrophic blood clots in his bowel. The condition can quickly become life-threatening, as the clots can break off and travel elsewhere in the body, stopping blood and nutrients from reaching vital organs. Within three weeks, Richard was dead.

A coroner’s report confirmed the cause: the jab triggered the clots that killed him. It must be said, such complications are vanishingly rare. Blood clots are thought to occur in just seven in every million vaccinated people, and out of 49 million Britons who have had two doses, the problem has contributed to just 24 deaths, according to data obtained from death certificates and recorded by the Office For National Statistics.

Yet it does happen. Today, Richard’s wife, barrister Deborah, is still struggling to come to terms with the impact of his sudden death. ‘He was a wonderful man who was the love of my life. We didn’t have children, so we spent our lives together travelling the world and having adventures. His death really was the worst thing that could have ever happened.’

Despite the heartbreak, Deborah acknowledges that Richard’s death was an anomaly. ‘Richard never hesitated to have the vaccine,’ she says. ‘As far as he was concerned, it was the right thing to do. He was very keen to have it to keep himself and others safe.’

His death certificate, seen by The Mail on Sunday, reads: ‘Richard Todman died from an extremely rare complication of the Covid-19 vaccine.’

Yet, according to Deborah, health chiefs have roundly failed to acknowledge that the Covid vaccine was to blame for her husband’s death.

A year on, she has yet to receive any financial support from the Department of Health – even though the Government’s vaccine damage payment scheme entitles families to a £120,000 payout if a loved one dies or is left significantly disabled as a result of a Government-recommended jab.

‘It’s not the money – of course it’s not the money,’ says Deborah, who has not felt able to return to work since Richard’s death. ‘But I resent the fact that the authorities are not saying, “We are so sorry your life is ruined because of this jab, here’s something to make life a tiny bit easier.” Instead I’ve been told I must wait another six months so that they can look through my husband’s medical records to determine whether or not he died because of the AstraZeneca vaccine.’

And Deborah is not alone. The Mail on Sunday has heard from other families who have faced a lengthy fight to get authorities to acknowledge that life-changing injuries resulted from the jab – as well as compensation – despite medical proof.

Official figures revealed to us show that of 1,200 claims for compensation related to Covid-19 vaccines, not one has been paid.

The story of Claire Hibbs

Claire Hibbs, a 49-year-old construction officer from Hertfordshire, has not been able to work since getting an AstraZeneca vaccine in March 2021. Five days later the mother-of-two was fighting for her life in hospital with blood clots in her lungs and liver. Doctors told her they believed these clots were caused by the vaccine.

Scientists believe that the pathogen in the AstraZeneca vaccine that boosts our protection against the virus triggers malfunctioning blood vessels in a very small minority of cases. In April last year, UK vaccine chiefs took the cautious decision to stop use of the AstraZeneca jab in adults under 30, following a small number of reports across Europe of blood clots in young people who had received it.

The Government’s medicine authority, the MHRA, has received 79 reports of death following the AstraZeneca jab – although the link has been confirmed in only a third of these cases.

Claire says: ‘I remember a load of doctors suddenly swarming around me. It was terrifying. I didn’t think I’d make it through the night.’

An intensive course of anti-clotting drugs proved effective and Claire was discharged from hospital two weeks later. But the incident has left her in permanent pain and suffering with debilitating fatigue.

‘I applied in June for the vaccine damage payment scheme, but the solicitors told me not to hold out hope as I probably won’t qualify as being disabled enough,’ she says.

The story of Jamie Scott

Another applicant still awaiting a decision on funding is 44-year-old Jamie Scott, an IT engineer from Warwickshire. The father-of-two suffered a brain haemorrhage the day after his first AstraZeneca jab in April last year and has been left with permanent brain damage.

Today he struggles with basic daily tasks and requires regular appointments with physiotherapists and neurologists to help regain full movement. He is partially blind, so no longer able to drive and struggles with attention and focus. Jamie’s medical records state that a rare adverse reaction to the AstraZeneca vaccine caused the blood clot on his brain, according to his wife, charity worker Kate, 33.

She says: ‘It is a miracle that Jamie is still with us. I called the hospital three times to say goodbye. But the doctors have said he may never work again.’

Kate applied for the vaccine damage payment scheme ten months ago but is yet to hear when a decision will be made.

The family wrote to Boris Johnson in August, explaining their ordeal. He responded, telling Jamie: ‘You are not a statistic, and must not be ignored. I am deeply touched by your story.’

‘It’s just words,’ says Kate. ‘I can’t go back to work, so we don’t have an income right now. Even if we do get the £120,000 payment, it’s not enough to keep us going for ever. And it’s insulting, considering what Jamie has been through.’

The families’ complaints have led legal experts to call for a shake-up of the vaccine damage payment scheme, which they say is outdated and ‘not fit for purpose’.

The scheme was set up in 1979 following years of campaigning by parent activist groups who believed the polio vaccine triggered brain damage in their children. Individuals who made a claim had their case assessed by Government health chiefs along with evidence from the patients’ doctors and coroners.

A one-off, tax-free payout of £10,000 was given if the Government-recommended vaccine was judged to have caused either death or left the claimant at least 60 per cent disabled, either mentally or physically. While the terms of eligibility have remained unchanged, the compensation amount has risen over the years, and in 2007 it reached the current level of £120,000.

‘It will hardly cover loss of earnings and medical costs if someone is seriously disabled and unable to work,’ says Prof Goldberg.

The story of tony Shigler

Tony Shingler, a 58-year-old security worker from Stoke-on-Trent, was paralysed by his first AstraZeneca shot and spent a year recovering in hospital. Doctors diagnosed him with a condition called Guillain-Barré syndrome, which causes numbness, weakness and pain in the feet, hands and limbs. It can also affect breathing. Individuals are ten times more likely to develop it as a complication of Covid-19 itself than they are after having the vaccine.

During his hospital admission, Tony’s daughter Natasha, 29, posted a picture of her father and a description of his condition on Facebook, in the hope of finding others in a similar position. But she was shocked when the post was removed within 24 hours. The social media company flagged it as ‘anti-vaccine messaging’, which was not permitted on the site.

But it wasn’t just social media that refused to engage with the family’s story. ‘I wrote to 40 MPs asking for support and not a single one responded,’ says Tony’s wife Nicola, 49. ‘No one would talk to us about what happened to Tony.’

Tony returned from hospital last week but will need months of rehabilitation to help him walk properly again, and surgery to fix bone injuries in his hands.

‘We were a perfectly happy family with little to worry about at the beginning of last year,’ says Nicola. ‘Now I find myself going back and forth to the job centre to claim Tony’s sick pay – we never imagined we’d ever be on benefits.’

Yet like all the families who spoke to us, Nicola says she would never discourage anyone from having a Covid jab. ‘We are well aware that Tony was one of the very unlucky ones,’ says Nicola. ‘All we ask for is for a little understanding and support. I don’t understand why the Government can’t help us out.’

In a statement, a spokesman for the vaccine damage payment scheme said: ‘We appreciate the continued patience of claimants at this time and understand their frustration at the speed of the process.

‘We’re continuing to progress claims as quickly as possible. An understanding of the potential relationship between Covid-19 vaccines and certain adverse events is still evolving. It was vital we didn’t make assessments before the scientific evidence reached a more settled position, to avoid claims resulting in inconsistent outcomes or disadvantaging claimants.’