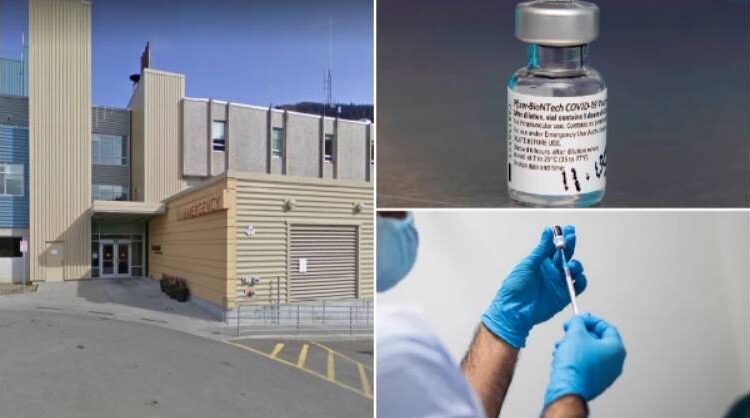 A hospital worker with no history of allergies was admitted to intensive care over a severe reaction she suffered 10 minutes after having Pfizer’s coronavirus vaccine.

The unidentified female worker suffered an anaphylactic reaction shortly after receiving the injection at a hospital in Juneau, Alaska, on Tuesday.

She had no prior history of allergies, and was not allergic to other vaccines. The woman began to feel flush 10 minutes after receiving the vaccine, and took an antihistamine.

She was taken to the emergency room at Bartlett Regional Hospital in Juneau after struggling to breathe. Emergency room director Dr Lindy Jones said the woman had an elevated heart rate and a red rash on her face and torso.

The woman was treated with other antihistamines, including epinephrine, which she responded to. But the patient’s symptoms soon began to re-emerge, promoting doctors to begin treating her with steroids too.

An attempt to wean the woman off epinephine saw her symptoms re-appear, before resolving. The woman has since been moved to intensive care for observation.

Dr Jones said the woman is now in a stable condition, the  Anchorage Daily News reported. She added that the patient is still glad she had the vaccine.

Dr Jones said: ‘She was still enthusiastic that she got the vaccine and the benefits that it would give her in the future.’

Two healthcare workers in the UK suffered an allergic reaction to the Pfizer injection after being given it last week. They have since recovered. The vaccine has been widely tested and analyzed, with government experts in both the US and Great Britain deeming it safe.

That has prompted health experts to warn people with severe allergies to avoid the shot. Government health officials in the United States and United Kingdom approved Pfizer’s shot for use after meticulous analysis of findings from trials of the shot.

The say the worst side-effects likely to be experienced by anyone who takes the shot include aches and a fever.

Pfizer’s injection, which is administered in two doses 28 days apart, is believed to be around 94% effective in preventing a person becoming ill with coronavirus. A similarly effective vaccine from rival manufacturer Moderna is expected to be approved for emergency use by the US Food and Drug Administration (FDA) in the coming days.

Healthcare workers and elderly people – particularly those in care homes – are set to be first in line for vaccines, with the shots expected to become available to the general public from spring 2021.

Coronavirus is known to have infected 16.7 million people across the United States, and has killed more than 304,000.