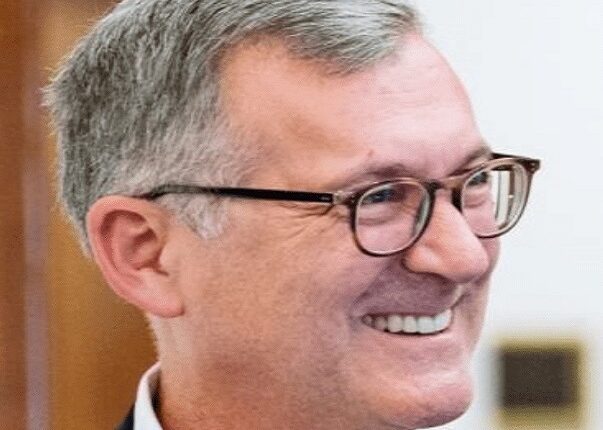 WASHINGTON, D.C. — A 59-year-old banking CEO is dead, and likely would have never been a story on this blog. But this obnoxious, vaxx-zealot LGBTV (for vaccine) “husband” may cause readers to re-think the hierarchy on The COVID Blog™ wall of shame.

Mr. John W. Ryan was President and CEO of the Conference of State Bank Supervisors (CSBS) since 2011. The organization is a quasi-government entity created in 1902, 11 years prior to the creation of the Federal Reserve. Its stated mission says the CSBS is:

“…uniquely positioned as the only national organization dedicated to protecting and advancing the nation’s dual-banking system.”

Note that the term “dual-banking system” is a fallacious concept because all U.S. banks, whether state, national or credit unions, are part of the Federal Reserve System. The U.S. dollar is a Federal Reserve product that only the Fed has the power to print, inflate and deflate. Thus it’s unclear what CSBS actually does, other than echo Federal Reserve propaganda.

That all said, Mr. Ryan had been with the organization in some capacity since 1997. He does not appear to have any social media accounts. But a man named Thomas Hogglestock says Mr. Ryan was his “husband” and frequently spoke of said “husband” on Twitter. Mr. Hogglestock set a new bar for repugnant, vaxx zealot pieces of work that make people like Ms. Karen Croake Heisler and Mr. Louis Knuxx look like…Brian A. Wilkins.

“You’re an asshole” if you’re not vaccinated and boosted

The vaxx zealotry of Mr. Hogglestock started in December 2020 when he equated the injections to “the light at the end of the tunnel.”

By February 26, 2021, Mr. Hogglestock said he was “beating the door down” to get his injections.

He received his first Pfizer mRNA injection on March 29, 2021.

Despite being a die-hard vaxx zealot, Mr. Hogglestock cancelled he and Mr. Ryan’s trip to Asia on July 26 because he had no faith in the holy serum protecting him in countries with “very low vaccination rates.”

Mr. Hogglestock was so anxious to receive his Pfizer booster on October 20, 2021 while in the waiting room, that he thought the doctor had “the raw ingredients and he has to mix up each dose.”

Mr. Hogglestock said on January 16 that he would force Mr. Ryan to “show me his vaccine card” to enter their kitchen.

He called the non-vaccinated and non-boosted “assholes” on January 20.

Mr. Hogglestock confirmed that he was quadruple-vaxxed, while Mr. Ryan was triple-vaxxed by April 11. He also seemed confused as to why and how Mr. Ryan “comes home with COVID” after three injections; and how he himself tested positive for so-called COVID-19 despite four injections. He blamed people not wearing masks.

Mr. Hogglestock confirmed again on April 15 that Mr. Ryan was triple-vaxxed, while he and the third person in their “bubble of 3” (whatever that means) were quadruple-vaxxed.

Mr. Hogglestock kept his vaxx zealotry and faith in the Church of COVID going strong until the final hours. He tweeted on May 16 at 5:15 p.m. about being depressed because the New York Times told him that Omicron would appear three times every year. Sometime in the next eight hours, Mr. Ryan passed away. Mr. Hogglestock tweeted a photo saying that Mr. Ryan’s death was “sudden and unexpected.”

Mr. Hogglestock tweeted on May 18 that he never said Mr. Ryan’s name on Twitter up to that point to “keep his public profile as neutral as possible.”

The CSBS cancelled its annual State-Federal Supervisory Forum that was scheduled to take place yesterday and today. No funeral arrangements have been announced as of publishing.