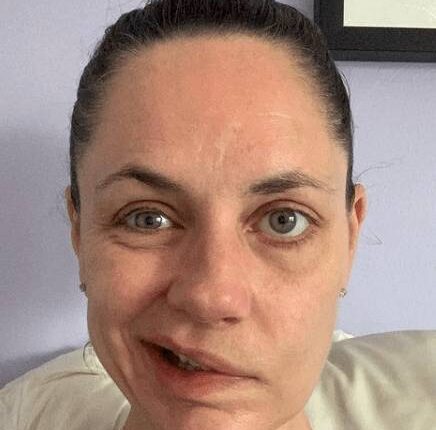 TORONTO, ONTARIO — A Toronto-based actress and acting teacher is seemingly content with her new look, and is encouraging others to follow suit.

Ms. Jennifer Gibson received the experimental AstraZeneca viral vector shot on April 24, according to her Instagram page. She expressed gratefulness and apparent sympathy for those who “don’t have the opportunity” to receive experimental injections.

Two weeks later, she noticed her face looked different. She developed full-fledged Bell’s Palsy, a known adverse effect for all of the experimental injections, by May 18. She’s chronicling the ordeal on Instagram. Mrs. Gibson posted a photo of an acupuncture session on May 23. Mainstream media and compromised doctors are deflected blame away from the AstraZeneca shot. But Mrs. Gibson admitted on Thursday that her condition is the result of a “bad reaction to the AstraZeneca vaccine.” Most cases of Bell’s Palsy heal by themselves within six months. The condition is permanent in some cases.

Mrs. Gibson has appeared in the soap operas “The Bold and the Beautiful” and “Guiding Light.” But she apparently makes most of her living as an acting teacher and coach.

Despite the possibility of permanent disfigurement, Mrs. Gibson said she “does not want to discourage people from getting vaccines.” She said that “people don’t die from Bell’s Palsy,” thus “it’s sucks, but is dealable.” Mrs. Gibson said she got the shot because she “wanted to get back to real life.”

Watch a report from CityNews Toronto.