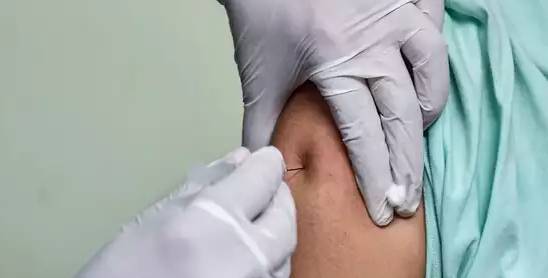 Amaravati, A woman public health worker, who had taken Covid vaccine on January 19, died at a government-run hospital in Guntur in the early hours of Sunday while undergoing treatment for alleged reactions.

While family members of Accredited Social Health Activist (ASHA) worker Vijaya Lakshmi (44) alleged that she died due to the adverse effect following vaccination, the officials said the cause of the death was under investigation.

Health officials said the cause of the health worker’s death would be known only after receipt of her autopsy report.

The officials said the death does not appear to be related to vaccination. They pointed out that over 10,000 people were given the vaccine in Guntur district so far and not a single Adverse Event Following Immunisation (AEFI) was reported.

Guntur district collector Samuel Anand announced that a government job will be provided to the son of the deceased. “If the family is eligible to get a house under the government scheme, the same will be allotted to them,” he told reporters at the hospital.

The collector, who faced angry protests by the deceased’s relatives and others, said he would send a proposal to the government for compensation to Vijaya Lakshmi’s family.

However, not satisfied by the collector’s response, the ASHA worker’s family members supported by the leaders of opposition Telugu Desam Party (TDP) began a sit-in at the hospital.

Raising slogans of ‘we want justice‘ the protestors squatted at the main entrance of the hospital. Police forcibly lifted the protestors and arrested them, leading to tension.

The TDP leaders alleged that the police resorted to excessive use of force to suppress the protest.

According to Vijaya Lakshmi’s family members, she took the vaccine on January 19. She developed high fever on January 21. They alleged that a private hospital in Guntur refused to admit her, forcing them to take her to the government hospital.

They said the doctors told them that she suffered brain stroke but they alleged that the death was the result of adverse effect of Covid vaccine.