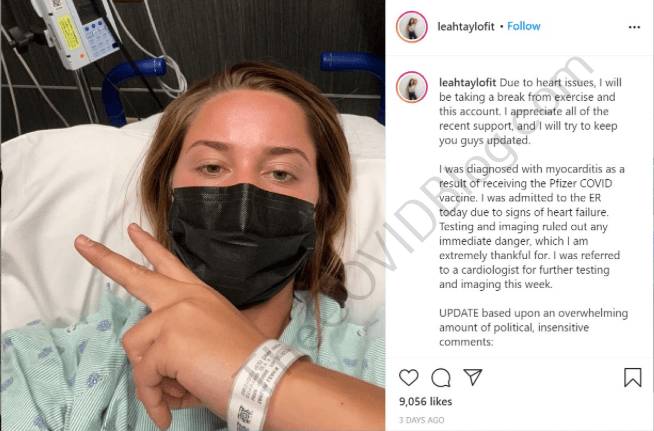 DAVENPORT, IOWA — A 22-year-old St. Ambrose University physical therapy student and body builder was scared and hesitant to play along with the global “vaccine” agenda. Now she is unable to workout and faces a precarious future after succumbing to the pressure.

Ms. Leah Taylor received her second Pfizer mRNA injection sometime between July 27 and August 22, based on context clues from her now-deleted Instagram account. It’s unclear whether she deactivated the account herself or if Instagram took it down because she reported severe adverse reactions to the mRNA injections. Several people have told us that their Instagram accounts were locked and/or deleted recently after sharing personal adverse effect stories.

Ms. Taylor reported weighing just 110 pounds in 2016. She bulked up to 165 pounds by June 20 this year. Ms. Taylor posted an Instagram update on August 23. She said she took “the whole summer off” from exercise because she was diagnosed with myocarditis after receiving the Pfizer mRNA injection. But based on her posts from the summer of 2021, she was working out regularly until July 27.

There were no Instagram posts for 27 days thereafter, which was unusual for her. Thus she likely received the injection during that span. Doctors told her to keep her heart rate down for six months.

Despite the doctors’ advice, Ms. Taylor posted another update on August 24. She reported doing a light weight lifting workout to get herself back in the groove while not raising her heart rate too much.

But myocarditis is no joke and is not a “rare” paper cut or mosquito bite that quickly heals as the Centers for Disease Control, big tech and mainstream media want the general public to believe.

Ms. Taylor posted no more updates until August 31. On that day, she posted a photo of herself in a hospital bed. Ms. Taylor said she was taking a break from her fitness Instagram account due to “heart issues.” She was screened for heart failure. But doctors ultimately ruled that out. She also posted an Instagram story showing her pre-Pfizer muscular physique, followed by a photo of her arm with an IV in it from a hospital bed.

Her update on the August 31 post is a sad, yet common story among the “vaccinated.” A portion reads as follows:

I understand the fear and danger on both sides. Clearly. I mean look what the vaccine has done to my previously healthy, 22-year-old heart. I was extremely hesitant and scared to get the vaccine. My doctoral program pushed for all students to get it, and vaccination mandates for healthcare workers came out in my area. That is why I had to get the vaccine.

The post had 749 comments and 3,000-plus “likes” before it disappeared. Many of the comments were belittling and telling her she got what she deserved.

Ms. Taylor earned a bachelor’s degree in Exercise Physiology in 2020. She commenced the Doctorate of Physical Therapy (DPT) program at St. Ambrose last year. She was 18 months away from being “Dr. Leah Taylor, PT, DPT.” Ms. Taylor has a second Instagram account. But the last update there was on August 22. Thus it is unclear if she’s home or still in the hospital.