What's Behind the London Attacks? 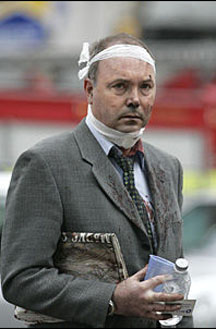 The bombing of the London Underground was a false-flag operation designed to keep the West mired in war. Don’t believe otherwise.

Only one word sprang to mind when I heard about the bombings that claimed the lives of dozens of Londoners today – convenient.

Is there anything convenient in death, or in thousands of lives destroyed from catastrophe? No – and words cannot express the sorrow I feel for the men and women changed by today’s events. But governments with skeletons in their closets have a great deal to gain from a national tragedy bolstered by “terrorism.”

As I sit in my office today, I hear the whispers of co-workers now utterly convinced our war on terror must continue. Despite American and British involvement in the Middle East birthing wave after wave of rebel forces, the Bush doctrine is now justified in the minds of millions. Petty grievances such as the Downing Street Minutes, the President’s flagging support and Karl Rove’s treasonous outing of CIA agent Valerie Plame are unimportant. A shadowy conglomeration is out to kill us.Sound familiar? It should – the same emotional ploy was used to great effect on Americans in the wake of September 11th. Question nothing, particularly your cries for vengeance or that nagging feeling in the back of your head. Justice delayed is justice denied.

Unlike four years ago, however, I refuse to accept that the attack on London was anything less than a false-flag operation designed to enrage Western “civilization” against the Middle East. Why? Because there is no reason for “terrorist” groups to attack England. As recently as this week, the Ministry of Defense announced that plans were being drafted that would pull British armed forces from the quagmires in Iraq and Afghanistan. With the British effectively admitting they’re throwing in the towel, the only motivation to stay could come from an attack that compels the forces to stay and fight “global terrorism.”

Think about it. The attack only benefits empires desperate to maintain a foothold in the Middle East without further eroding public opinion. Will Parliament shrug their shoulders and push their soldiers into longer tours of duty because of this? Obviously it’s too early to tell, but if that happens, insurgents and rebels will have lost more than they could have ever possibly gained in destroying part of the Underground.

Brian Kilmeade of Fox News agrees, claiming the sabotage “works to … [the] Western world’s advantage, for people to experience something like this together.” It doesn’t just make “terrorism” an American problem. It makes it a worldwide problem. The Number One problem.

No longer do we need to concern ourselves with two world leaders (who have spawned more worldwide terrorism than any fanatical religious organization) going unquestioned in their lies that started a war. We can cast off our sluggish economies, lack of freedoms and pitiful descent into draconian law. Terror is on the rise.

I feel like I’m sitting in my apartment watching the World Trade Center collapse all over again.

Everything is the same, right down to the previously unheard of Islamic group (The Secret Organization of al-Qaida in Europe? Are you kidding me?) taking credit – even though the translation falls apart under scrutiny and the Q’uran is improperly cited. Considering the only Al Qaeda cell to ever be uncovered was a front for the Mossad, you’d think the perpetrators could at least come up with a clever new booga-booga name to grab headlines. Their arrogance is startling.

As is the ever-present Israeli connection, a staple among false flag operations. Before today’s attack, the Israeli Embassy in London was notified an attack was forthcoming. As a result, former Israeli Prime Minister Binyamin Netanyahu remained in his hotel room rather than head towards a nearby hotel where he was to address an economic summit.

The embassy denies it had any prior knowledge, of course, but the story has changed dramatically in the process. If, as they say, Netanyahu was not warned, how did he know to stay in his room? How did he know the danger was so severe that he dare not venture out of the hotel?

Oops! The story’s changed again – here Netanyahu says that British police had warned the Israelis (but not the rest of the city?) of a pending attack. Scotland Yard denies this; Israel’s reply was to say Netanyahu received his warning after the first blast. How? It was initially reported as a power surge for hours. What is being hidden here? And why isn’t there an investigation into these obvious discrepancies?

It’s enough to make your head spin and your eyes cross with rage.

Regardless, I am making an appeal to Britons who are understandably wracked with grief at the moment – don’t buy into the hatred the way we Americans did. Don’t ignore the obvious evidence that this whole affair was orchestrated by your own government. Most importantly, don’t let the deaths of the few, however tragic, plunge your nation into another fit of war and civic clampdowns.

Toying with your emotions is expected. Don’t fall prey to ignorance. See the attack on your home for what it really is – a distraction that will keep your money, resources and troops mired in ceaseless battle for an ideology that betrays your democratic and civilized tenets.

Honor your dead with tears, not a cry for war or praise for a disgraced leader.

Canon Fodder is a weekly analysis of politics and society.