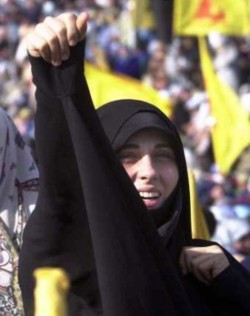 It is time America understood Hezbollah for what it really is, not what the Israelis and their Zionist friends say it is. Unfortunately, our President, Bush, and Conde Rice, misunderstand, or prefer to remain ignorant of, the truth about Hezbollah.

Hezbollah is a social, political, educational, medical and military organization based primarily among the Shi’a of Lebanon. In addition, Hezbollah also includes many Sunni and even Christians who ally themselves with Hezbollah because of the good this organization does in Lebanon. Many of the doctors who work in their centers, as well as teachers in their schools are Christian and Druze. As the Christian President of Lebanon, Emile Lahoud said of Hezbollah, when it was under attack by Presiden Bush, “Hezbollah is an integral part of the Lebanese government, it is also part of our military, it part of our social order.” This was echoed by the late, beloved, Prime Minister, Rafik Harriri.

This is the truth about Hezbollah; not what Bush and his Zionist cronies, and the uneducated Conde Rice has to say about the organization.

Let us look at what Hezbollah has done in Lebanon: it has set up over 50 hospitals; it has set up over 100 schools (secular schools primarily) and many libraries; it has participated in the governing of Lebanon in the parliament and in the life of the country; it has driven the Israelis out of southern Lebanon and kept them out-to this day, it is the force that stands guard against another Israeli invasion of Lebanon. Many of us who witnessed that, and Robert Fisk, the esteemed, award-winning columnist for the Independent of the United Kingdom, will back me up on this, we saw Hezbollah fighters, armed with small arms, mines, bazookas chase the Israeli tanks, Bradley fighting vehicles, armored cars and troops out of Lebanon. It was an amazing sight to behold; this is fact. Even with planes and helicopters, the Israelis could not sustain themselves in Lebanon; they were defeated by the Hezbollah. They have sought political revenge ever since.

Thus, at this point, Israel is the biggest campaigner to have Hezbollah labeled a “terrorist organization” by the world-but all that Hezbollah did was to kick the Israelis out of Lebanese land-to kick the occupying Israeli IDF off of Lebanese soil This was defensive action; not offensive action.

Hezbollah has never invaded Israel, nor has Hezbollah ever attacked Americans-though the U.S. media said it has.This is nothing but a lie. True, some of the Shi’a did fight back, as Amal, against the Americans when the American troops were siding with the Falangist Gemeyal family in attacking the Muslims, especially the Shi’a-but it was not then Hezbollah and every honest historian knows this. But there is no end to lies that the Zionists will go to because of their shame at being beaten by Hezbollah.

So why is Hezbollah labeled as a “terrorist organization”-it’s pure and simple, because it is a strong nationalist Lebanese force that refuses to bow to Israel or America or the Falangists.

Remember in America the patriots who fought against the British; Hezbollah is like those American patriots-just fighting for their land, their country. As an American, I am all for that. Any decent, educated and moral human being is for that.

It is time the world, especially the American people, knew the truth about Hezbollah and its charitable work, its social work, its medical work, its educational work and its standing in the hearts of most Lebanese and its standing in the Lebanese government. The lies of President Bush and his mistress of state, Conde Rice, must be undone. Tell your friends the truth; perhaps in that way, the truth will prevail over the propaganda Bush and Rice are putting out in the world.

Professor Sam Hamod is an expert on the Middle East and has written extensively on the Arab world, Islam and other parts of the Third World; he is the founder and editor of 3rd World News and 3rd World News Service in Wash, DC (retired); Director of The Islamic Center of Wash, DC (retired) and has taught at Princeton, Michigan & Iowa; he may be reached at [email protected] Dr. Hamod also edits http://www.todaysalternativenews.com