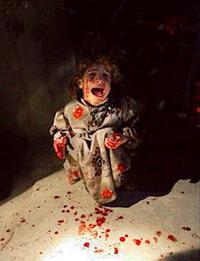 HUSH HUSH WHISPER WHO DARES, NEOCON KILLERS ARE SAYING THEIR PRAYERS
The only thing unusual about the hail of bullets that struck the car of Italian journalist Giuliana Sgrena in Baghdad, was that this time the US said sorry. Since the start of the invasion, occupation forces have wiped out numerous carloads of Iraqis.
This little girl was splashed with the blood of her parents as they were shot while driving home. Where is she now? Who knows? The killers are immunised from prosecution. (In February, Australian soldiers added to the car passenger tally). These incidents happen so often, it might be the military’s idea of target practice.
Whether or not Iraq ever achieves a genuine democracy – one capable of exiling the Pentagon and dismantling its bases – there will come a time when White House appeasers, the Murdoch propagandists, the neo colonialists … will stand fearful before their mirrors and their makers. By what moral code, they will ask themselves in aguish, did I sanction the bombing of cities in far away countries whose citizens offered no threat? One day, the images of dead & limbless Iraqi children suppressed by the mass media and revealed on blogs will fester in their unconscious.

Restless at 4am they will shout in the dark: We even bombed wedding guests and claimed they were terrorists. One day the Generals and spin-artists will yearn for Alzheimers, in order to quell the ghosts of the slain. Why did we refuse to acknowledge the scale of the slaughter? So blinded were we by imperial hubris, so hungry for blood, we bombed mosques, hospitals and Al Jazeera; we razed cities, we installed puppets, we turned the population against us, then washed down our guilt with propaganda and oil. So many dead, we didn’t keep count. So many warned us but we didn’t listen. The war against terror gave birth to more terror. Yet nothing stood in our way – not the Geneva Conventions, not the laws against torture, not the innocence of children, not the loss of our name. The streets ran with blood, our critics we hunted.

Why did it take us take so long to admit there were no WMD’s in Iraq, apart from the ones we imported. (Depleted uranium, cluster bombs, napalm, gun ships, vacuum bombs. Dr. Khalid ash-Shaykhli, an official at Iraq’s health ministry, has confirmed that US forces used mustard gas, nerve gas, and other incendiary chemicals on Fallujah).
Al Qaida never set foot in Iraq until we did. Then George Bush became its star recruiter. Over 100,000 Iraqis paid the price for 9/11, in which they played no part, not even Saddam Hussein. The President talked endlessly about spreading freedom, but what he spread was cliché and fear. Our troops so hated the people whose country they occupied, that prisoners were molested for digital amusement – and they were the lucky ones. In a secret string of gulags, inmates were disappeared off the face of the earth. Even if a case became public, the perpetrator was rewarded. The CIA man in Kabul, who chained an Afghan boy naked to a concrete floor until he froze to death, was promoted. Mostly secrets stayed safe because the media was embedded. Difficult witnesses were dealt with by snipers. On top of all this was black ops, pillage and profits, including Halliburton’s ongoing festival of embezzlement. And we wonder why the US is no longer seen as beacon of freedom. Why didn’t I realise that by supporting the doctrine of pre-emptive strikes, I was also trashing the 1648 treaty of Westphalia, which came into being for an excellent reason – to stop sovereign states attacking each other unless they were under imminent threat. Al Qaida was never a State. The reasons for the invasions have been revised retrospectively. It now seems we went to Afghanistan to help with the opium crop. We went to Iraq to impose democracy, which only leaves 45 more tyrannies left to invade. Except that some of these are our allies. Pakistan is a dictatorship. Uzbekistan is a Stalinist hellhole. Saudi Arabia is a monarchy. Egypt is our offshore torture chamber. North Korea can claim the doctrine of pre-emption to bomb the West. Thanks a lot, George. You’ve watched High Noon so many times, you think you’re Gary Cooper playing the sheriff. Trouble is, your methods put you at one with the crooks.