Emergency Preparedness against the ''Universal Adversary" 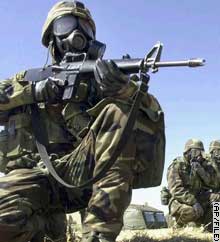 Orwellian “Scenarios”
A recent Report of the Homeland Security Council entitled Planning Scenarios describes in minute detail, the Bush administration’s preparations in the case of a terrorist attack by an outside enemy called the Universal Adversary (UA).
The Universal Adversary, is identified in the scenarios as an abstract entity used for the purposes of simulation. Yet upon more careful examination, this Universal Adversary is by no means illusory. It includes the following categories of potential “conspirators”:

“Because the attacks could be caused by foreign terrorists; domestic radical groups; state sponsored adversaries; or in some cases, disgruntled employees, the perpetrator has been named, the Universal Adversary (UA). The focus of the scenarios is on response capabilities and needs, not threat-based prevention activities.” (See Planning Scenarios )
The domestic radical groups and labor activists, which visibly constitute a threat to the established political order, are now conveniently lumped together with foreign Islamic terrorists, suggesting that the PATRIOT anti-terror laws together with the Big Brother law enforcement apparatus are eventually intended to be used against potential domestic “adversaries”.
While the Universal Adversary is “make-believe”, the simulations constitute a dress rehearsal of a real life emergency situation:
“The scenarios have been developed in a way that allows them to be adapted to local conditions throughout the country”
Fifteen Distinct Scenarios
The scenarios cover the entire array of threats:
15 distinct threat scenarios to the Security of America carried out by four categories of enemies: Islamic terrorists, radical groups, rogue adversaries and labor activists.
The scenarios simulate operations carried out by the Universal Adversary (UA). They include inter alia a nuclear detonation (with a small 10-Kiloton improvised nuclear device, anthrax attacks, a biological disease outbreak including a pandemic influenza, not to mention a biological plague outbreak. Various forms of chemical weapons attacks are also envisaged including the use of toxic industrial chemicals, and nerve gas. Radiological attacks through the emission of a radioactive aerosol are also envisaged. (See Text box below)
What is revealing in the “doomsday scripts” is that they bear no resemblance to the weaponry used by clandestine urban “terrorists”. In fact, in several cases, they correspond to weapons systems which are part of the US arsenal and which have been used in US sponsored military operations. The description of the nuclear device bears a canny resemblance to America’s tactical nuclear weapon (“mini nuke”) , which also has a 10-kiloton yield, approximately two-thirds of a Hiroshima bomb. That Homeland Security should actually envisage a make believe scenario of large scale nuclear attacks by ‘domestic radicals’ and/or Islamic terrorists borders on the absurd.
With regard to the nerve gas attack scenario, in a cruel irony, it is the same type of nerve gas (as well as mustard gas) used by the US military against civilians in Fallujah.

Building a Consensus
These simulations are applied to sensitize and “educate” key decision makers. The simulated data, the various categories of ‘conspirators”, the types of deadly weapons envisaged in the simulations are part of this knowledge base. The political objective of the Bush administration is to create a broad consensus: a feeling of allegiance and commitment within the emergency preparedness community.
The nature of the adversaries and the dangers of the attacks (ranging from nuclear detonations to nerve agents and anthrax) become “talking points”. In the scenarios, the conspirators including the “domestic radical groups” and “disgruntled employees” are described as being in possession of “weapons of mass destruction”.
In the comprehensive 2005 anti-terrorist TOPOFF-3 exercises , (similar to war exercises, conducted recently under the auspices of Homeland Security) precise data sources were simulated and used to identify potential conspirators.
This “world of fiction” underlying the scenarios becomes real. The data sources “replicate actual terrorist networks down to names, photos, and drivers license numbers.”
The scenarios create for the more than 10,000 TOPOFF-3 participants, a carefully designed “reality model” which shapes their behavior and understanding:

“Planners included the threats they considered most likely or devastating, said Marc Short, a [Homeland Security] department spokesman.”
The “reality model” script of threats and conspirators replaces the real world.
These fabricated realities penetrate the inner-consciousness of key decision makers. The reality model script molds the behavior of public officials, it builds a “knowledge” and “understanding”, namely a shared ignorance regarding the war on terrorism and the “adversaries” who oppose the administration’s war and homeland security agendas.
A world of fiction becomes reality. The scenarios “enable exercise players to simulate intelligence gathering and analysis”, in preparation of an actual emergency situation which, according to the scenarios’ assumptions, would lead to mass arrests of presumed terror suspects.
Fiction becomes fact.
Conversely fact becomes fiction. “Ignorance is strength”. The “scenarios” require submission and conformity: for those key decision-makers at the federal, State and municipal levels, the US government, namely the Bush Administration is the unquestioned guardian of the truth. The outright lies concerning Osama, Zarqawi, the “rogue enemies” of America, “weapons of mass destruction”, not to mention 9-11, are upheld as indelible truths.
What we are dealing with is a process of indoctrination, which develops a new righteousness and which ultimately abolishes the Rule of Law. In the words of Central Command General (ret) Tommy Franks:

“Reality Model” Script based on “Flimsy Intelligence”
The process of emergency preparedness could be launched, even in the case of a threat based on “intelligence”, which proves at some later date to be unfounded. In the scripted “scenarios”, the pictures and IDs of potential conspirators in police data banks are real, leading immediately in the case of an actual emergency to mass arrests.
Known and documented, several of the post-911 terrorist threats were in fact based on fake intelligence. Several of the high profile code orange terror alerts had been fabricated outright. (See Fabricating Intelligence as a Justification for War, See also here)
Acknowledged by Tom Ridge, upon retiring from his position as Sec of Homeland Security:

“there was only flimsy evidence to justify raising the threat level… Ridge [said] .he often disagreed with administration officials who wanted to elevate the threat level to orange, or “high” risk of terrorist attack, but was overruled… There were times when some people were really aggressive about raising it, and we said, ‘For that?’ ” (USA Today , 10 May 2005)
Fake intelligence is part of the disinformation campaign. It plays a key role in building the “war on terrorism” consensus. It builds a justification for war. The national security doctrine rests on the existence of an outside enemy, which threatens the Homeland.
The falsehoods created by this “flimsy intelligence” are embodied in the terror attack “scenarios” and exercises. Lies are transformed into indelible truths. The latter are shared by State officials, private sector decision-makers and “first responders” in a national emergency situation, if and when it occurs.
In other words these Orwellian “scenarios” assume that the various threats must be taken seriously, irrespective of the source of the intelligence or the reliability of the intelligence. The scripted “scenarios” and anti-terror TOPOFF exercises are based on fake terror threats, which requires the production of fake intelligence.

Martial Law
Both the “scenarios” and the TOPOFF-3 anti-terror exercises were barely mentioned in the media. In other words, we are not dealing with a propaganda ploy directed towards the broader American public. The propaganda in this case is targeted. It takes the form of “training” and emergency preparedness:

“We are moving forward in applying lessons learned to anticipate and address all possible attack scenarios,” an F.B.I. spokeswoman said, asking not to be named because her department was not the lead author of the document. “With enhanced law enforcement and intelligence community partnerships, we are able to better detect terrorist plots and dismantle terrorist organizations.” (NYT 26 Feb 2005)
The “Scenarios” were developed for “Use in National, Federal, State and Local Homeland Security Preparedness”. They instill in public and private sector officials and participants a sense of responsibility, duty and awareness in relation to something which is ultimately fictitious.
The “scenarios” and anti-terrorist exercises develop observance and compliance by public officials, law enforcement, intelligence, military and civilian federal and State employees, etc.
Moreover, the scenarios also envisage the circumstances under which Martial Law could be triggered in the case of a threat by the Universal Adversary. In other words, fake intelligence could indeed be used to trigger a martial law situation in America, much in the same way as (deja vu) fake intelligence was used “to fit the policy” of invading Iraq, as revealed in the controversial Downing Street Secret Memo.
In a real life emergency, instructed by the relevant authorities, law enforcement officials would proceed to arrest the Universal Adversary, including members of radical groups, labor activists, etc.
Law enforcement officials would no longer be instructed to uphold the Rule of Law. In fact quite the opposite.
The arrests would be conducted on behalf of officials in high office, who have broken the law, and who are known to have committed extensive war crimes.
In the “reality model” script, the US State, its military-intelligence apparatus and war planning machine become the guardians of the peace. The State is above the law.
The “reality model” script not only sets the stage for Martial Law, it also constitutes an obvious political and legal safeguard against prosecution and/or impeachment of the President and his entourage.
Some 88 members of Congress, in a letter addressed to President Bush, have recently demanded “whether there was a coordinated effort with the U.S. intelligence community and/or British officials to “fix” the intelligence and facts around the policy [of waging an illegal war on Iraq] as the leaked document states?”
Under martial law, the Rule of Law is banished. The lies, crimes and atrocities of the real world are substituted by a “reality model” script of fictitious attacks by fictitious “conspirators”. Those who in any way question to existence of the Universal Adversary would themselves be the object of possible arrest or prosecution.

A large amount of “real money” from tax payers pockets is used to protect America against a non-existent enemy, the Universal Adversary.

Under the guise of emergency preparedness, the administration has allocated more than of 40 billion dollars to beefing up the police state apparatus, an amount broadly equivalent to the “official” budget of the CIA.

The scenarios and exercises of terror attacks are being used by Homeland Security Sec Michael Chertoff, to push “risk-based planning” as a central theme of the DHS, also with a view to boosting the Homeland Security budget.

A multibillion dollar Domestic Nuclear Detection Office is envisaged, with a mandate to “detect and report attempts [by conspirators] to import, assemble or transport nuclear explosive devices, fissile material, or radiological material intended for illegal use”

The ultimate result (and intent) of these various counterterrorism initiatives, is not to “make America safer” against possible attacks by a non-existent Universal Adversary. Quite the opposite, emergency preparedness is the pretext for the militarization of civilian justice and law enforcement (See Frank Morales, “Homeland Defense” and the Militarisation of America, Frank Morales, Sept 2003. The Homeland Security agenda consists in breaking within America, all forms of social resistance and opposition to the “war on terrorism”.

Appendix: Hyperlinks to The Report

Created for Use in National, Federal, State, and Local Homeland Security Preparedness Activities

To consult the complete document