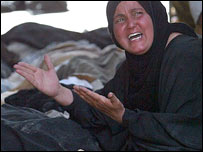 Death toll of 1,000 feared in stampede of panicked Shi‘i pilgrims on crowded bridge in Baghdad. Disaster compounded by closure of most roads in the area by US forces, increasing overcrowding, seriously delaying arrival of medical help.

At least 841 were confirmed dead and 323 others injured Wednesday afternoon as a result of a stampede on the al-A’immah Bridge in Baghdad, in which, it was reported, part of the bridge collapsed.

A dispatch posted on the website of al-Jazeera satellite TV at 15:50GMT Wednesday evening, quoted the “Ministry of Health” in the US-installed Iraqi regime in Baghdad as saying that the death toll was likely to top 1,000.

Earlier, in a dispatch posted at 2:20pm Mecca time Wednesday afternoon, the correspondent for Mafkarat al-Islam reported a brigadier general in the Iraqi puppet army as saying that the total number of those killed in the stampede on the bridge might exceed 1,000 persons, because of the severity of the injuries suffered by many of the survivors.
The Mafkarat al-Islam correspondent said that most of the dead had been pushed off the bridge and into the Tigris River where they drowned, according to the general.

The general’s estimate was backed up by the Deputy Director of Medical City Hospital in Baghdad who said that the sun would not set Wednesday except on more than 1,000 dead pilgrims, Mafkarat al-Islam noted.

Media reports said that the pilgrims were in a procession heading to the al-Kazimayn Mosque on the right bank of the Tigris when rumors of a bomb – that turned out to be unfounded – produced a deadly stampede.

A statement issued by the Association of Muslim Scholars of Iraq, the highest Sunni Muslim religious authority in the country, said that for more than three days caravans of Iraqi pilgrims had been pouring in from all over Iraq to visit the tomb of the 8th-Century Shi‘i Imam Musa ibn Ja‘far on the occasion of the anniversary of his death.

Witnesses quoted in the statement said that there was great overcrowding and pushing as pilgrims from the provinces jammed in, particularly on the al-A’immah bridge that links the al-A‘zamiyah district of Baghdad with the al-Kazimiyah district where the tomb is located. The witnesses said that there was a panic in which many fell and were trampled. Older people were quickly killed in the stampede.

The witnesses said that the disaster was compounded by the fact that “nearly all of the roads” in the area had been closed or obstructed by concrete barricades put up by the US occupation forces, aggravating the overcrowding and preventing medical help from getting to the victims quickly.

Those views of witnesses were backed up when the “Minister of Transport” in the puppet government in Baghdad, Salam al-Maliki, told a press conference that the “multi-national forces bear most of the blame for the catastrophe because they prevented the arrival of medical assistance to the area where the disaster took place.”

Al-Maliki said that the US forces deployed in the area of the catastrophe had closed roads and prevented any cars other than their own vehicles from entering their areas. He said that they prevented ambulances and medical teams of divers and first aid providers from reaching the scene of the disaster in time.

Al-Maliki accused the American occupation forces of being so afraid of possible attacks on themselves at the time of the incident that they had no concern for the lives of Iraqis, Mafkarat al-Islam reported.

In a dispatch posted at 3pm Mecca time Wednesday afternoon, the Mafkarat al-Islam correspondent in al-Kazimiyah reported that a group of witnesses there said that the immediate cause of the panic that led to the disaster was an unintentional mistake made by puppet policemen from the al-Kazimiyah police station who were deployed at the approach to the bridge.

Ahmad Hassun, one of those injured in the disaster, told Mafkarat al-Islam that the reason for the panic and stampede was that the people on the bridge were responding to the police who were trying to get them to move with greater speed so as to allow the people jamming the street to get on to the bridge more quickly.

Hassun said that the police were shouting things like, “Brothers, hurry up. There are car bombs. There are terrorists. Don’t bunch up. Hurry on. Keep moving.” But the crowds took that talk to be an actual warning of something about to happen and started to push and jump into the river. Hassun said he was hurt when he fell to the ground and was trampled by other people.

Another witness who was at the scene when the disaster occurred told Mafkarat al-Islam that after the panic started, the police themselves panicked and started shouting, “Brothers! False alarm! False alarm! There’s nothing wrong!” But the people didn’t trust the police and thought they were just trying to stay in control so they paid no attention to them.

The Mafkarat al-Islam correspondent reported that local residents of the area around the bridge agreed with the witnesses that there had been no armed attacks in the area, as some sources claimed, and that the whole disaster was due to an unintentional mistake by the police.

The witnesses who spoke to the Association of Muslim Scholars said that the people from the predominantly Sunni al-A‘zamiyah district rushed to the aid of the victims and provided whatever help they could.

Many donated blood. According to a Mafkarat al-Islam dispatch posted at 2:50pm Mecca time Wednesday afternoon, hundreds of Sunnis from al-A‘zamiyah had flocked to al-Yarmuk General Hospital in central Baghdad to donate blood for the victims of the bridge disaster in the facility. The correspondent in the Baghdad district of al-Karakh reported that Sunni religious leaders and Sunni tribal notables had taken the lead in the emergency effort to donate blood.

Sunni residents of the area where the disaster took place, hastened to take part in the recovery of the injured and the dead from the Tigris River, carrying them to ambulances. In that effort as well, Sunni religious leaders played a prominent role.

Sadr spokesman: no such disasters when Sadr Movment organized events . . .

Meanwhile, al-Jazeera satellite TV reported ‘Abbas ar-Rabi‘i, the political representative of Shi‘i Muslim religious leader Muqtada as-Sadr, as pointing out that this year the US occupation authorities had appointed the people who organized the activities marking the religious occasion and that it was on their watch that the catastrophe occurred. On earlier occasions, when the as-Sadr movement had charge of the event, nothing of the sort ever took place.

Later in the afternoon Muqtada as-Sadr himself issued a statement in an-Najaf in which he blamed the US occupation and its puppet government in Baghdad for what he called the “Baghdad Massacre” and demanded that an investigation into the incident be opened.

Iraqi Journalists Union refutes claims by pro-occupation “Interior Minister” that no journalists are being arrested.

The “Interior Minister” in the US-installed Iraqi regime in Baghdad has issued a statement denying reports by Mafkarat al-Islam that his ministry has begun to arrest journalists who work for organizations that refer to the Iraqi Resistance forces as “Resistance fighters” rather than “insurgents” or “terrorists.” The statement said that claims that claims that journalists are being arrested or pursued are “without foundation,” according to a report carried by Mafkarat al-Islam on Wednesday.

“We do not combat journalists, pursue or arrest them ever,” said Baqir Jabr Sulagh, the “Interior Minister” in the Iraqi puppet regime and also prominent leader in the Badr Brigades Shi‘i sectarian organization – the armed wing of the Supreme Council for the Islamic Revolution in Iraq (SCIRI) – who entered Iraq together with US invasion troops in spring 2003.

The Iraqi Journalists Union, however, rejected the “Minister’s” statement saying that more than 60 journalists are currently under arrest and in the jails run by the “Interior Ministry.” Among the journalists now behind bars are a correspondent for al-Jazeera satellite TV and another working for the ar-Rafidayn Iraqi TV station. Some journalists have been jailed and then disappeared, with nothing more known of them.

In its press statement, read out by as-Sayyid Rashid al-Hayyali in a hall of al-Mustansiriyah University in Baghdad, the Iraqi Journalists Union declared that “what Mafkarat al-Islam had reported was precisely true and not mistaken as the Minister claimed. Journalists on the ground know this, as they are exposed to the reality of being pursued, restricted, and arrested. Everyone know that but no one has dared to say it except Mafkarat al-Islam.”

Iraqi “Interior Ministry” puppet forces arrested the journalist Muhammad ‘Abd al-Karim, a correspondent for the Sunni newspaper Dar as-Salam about two weeks ago. Also in prison are Hasan Hammud of al-Kalimah newspaper published in al-Anbar Province and Jamal Khalil, the editor of the newspaper run by the Shi‘i Muslim religious leader Muqtada as-Sadr.