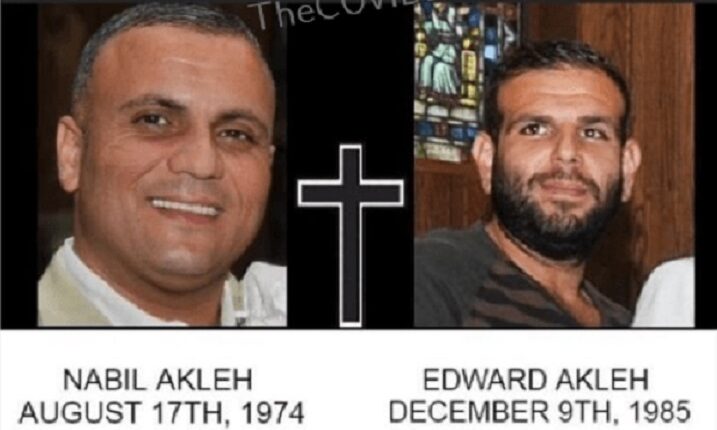 This all happened earlier this year. But these stories are important for documenting how the injections destroy families.

There isn’t much information available about Mr. Nabil “Billy” Akleh and Mr. Edward “Eddy” Akleh. Billy was 47 years old. His younger brother Eddy was 36. Both resided in Mississauga, Ontario. Several of their family member speak/write Arabic and Persian on social media.

Akleh is the name of a small village in northwest Iran. The vast majority of Akleh’s in the world live in the U.S. and Canada, with Iran coming in third. Note that Palestinian-American Al Jazeera journalist Shireen Abu Akleh was shot and killed by the Israel military in Palestine (West Bank) on May 11. The instant family, based on their social media posts and other sources, is affiliated with the St. Mary’s Antiochian Orthodox Church in Mississauga. It is an autocephalous church, meaning the bishop does not answer to a higher-ranking bishop.

That all said, Ms. Ronia Kourzom-Barakat announced via Facebook that her cousin Billy Akleh passed away “suddenly and unexpectedly” on January 29.

Mr. Akleh’s obituary says he is survived by “his siblings, Abey, Somer and Eddy.” His funeral was held on February 5 at the aforementioned St. Mary’s Antiochian Orthodox Church.

Since the two died so closely together, another cousin, Mr. George Akleh, announced that their traditional 40 Day Memorial Services would be held on the same day, March 5.

A Twitter user named Deb, who is also from Ontario, claims to know the Akleh family. She said the deceased brothers recently received booster shots together. Both died of heart attacks, according to her account. But the family refuses to believe the two died because of the injections.

Make of that what you will.