Journalist Denham Hitchcock in hospital with pericarditis after Pfizer vaccine 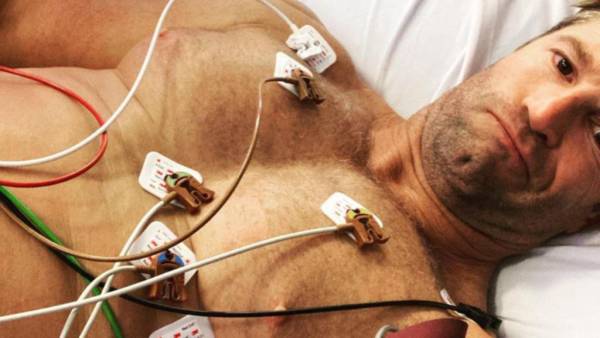 Channel 7 journalist Denham Hitchcock has revealed he is suffering from a heart condition as a rare side effect of the Pfizer coronavirus vaccine.

The Spotlight reporter spoke from hospital after being diagnosed with pericarditis — a swelling or irritation of the sac-like membrane surrounding the heart that helps keep it in place.

He says the extremely rare condition was caused by his first shot of Pfizer which he received 25 days ago.

Hitchcock who insists he is “not anti-vax”, but is “pro-choice” and “pro-opening the bloody country up”, made the decision to share his story because as a journalist “it would be hypocritical not to.”

“The first week was like any vaccine. Feeling off,” Hitchcock wrote on Instagram from his bed at Gold Coast University Hospital.

“But nearing the end of the second week my heart started to race, I was getting pins and needles in the arms, extreme fatigue and a very strange sensation of dizziness.”

By the end of the third week Hitchcock said his symptoms were worsening, with sharp chest pains, cold shivers and chills and increasing dizziness.

“25 days after the shot and probably a little late to hospital — but here I am — diagnosed with pericarditis — or inflammation of the heart due to the Pfizer vaccine.”

As of 25 July, 84 cases of myocarditis and/or pericarditis had been reported in Australia to the Therapeutic Goods Administration following the Pfizer vaccine.

The cases were disproportionately men and teenagers under the age of 30 after their second dose of Pfizer.

AstraZeneca has not been associated with an increased risk of myocarditis/pericarditis.

“In the current vaccine frenzy, no one is talking about this but it’s clearly happening,” Hitchcock said.

The reporter said he wasn’t discouraging people from getting the Pfizer vaccine, and acknowledged that life may “get difficult” for people who choose not to get vaccinated.

“If you don’t want the vaccine, I don’t have a problem with that either, but life and travel will get difficult for you,” he said.

“The only thing for me that’s dead certain — if they don’t open Australia up when we reach their milestone of 70 per cent — then there will be a lot more people marching in the street. You want the trust? Keep your damn promise.”