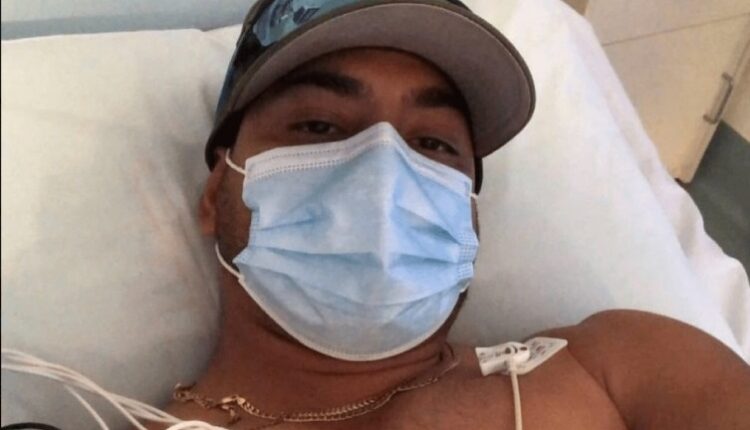 DARWIN, NORTHERN TERRITORY — A perfectly-healthy father who appears to play Australian-rules football is facing a life or death decision in yet another “jab for job” story ending with heart problems.

Mr. Matios (“Teo”) Christopher Hayes received his first Pfizer mRNA injection on November 7, according to his Instagram page. He prefaced his lengthy post with a chilling reality that millions and perhaps billions of people are facing all over the world.

“I didn’t really want this vaccine but when you’re being told you won’t be able to continue working unless you get vaxxed & it’s the jab or unemployment, you’re not really left with much of a choice.”

Just 40 minutes after the injection, Mr. Hayes reported feeling “sharp stabbing pains” on the left side of his chest. Later that night, he said his chest felt like “someone was sitting on it.” The stabbing pains then spread to his ribs, abdomen and feet. But he ignored all the symptoms and tried to go on with his regular life.

Mr. Hayes was at work on November 10 when the stabbing pains worsened and spread to almost every part of his body. That’s when he realized something was gravely wrong.

Mr. Hayes left work early and went to Palmerston Regional Hospital. Doctors administered an electrocardiogram (ECG) and blood tests. They determined that he did not have myocarditis. But the shortness of breath, stabbing pains and heavy chest persisted. Mr. Hayes posted both the report from the first doctor, and what appears to be a doctor’s note excusing him from work for a week. Said note lists “possible pericarditis” as the reason for the excused absence.

For the record, we searched for a Dr. Lucy Butcher in the Northern Territory and could not find that name anywhere. But she is the alleged doctor who treated Mr. Hayes on November 10.

Mr. Hayes works as a “High Voltage Cable Jointer” at PowerWater Corporation, according to his Facebook page. He has a two-year-old daughter who accounts for about half of his Facebook and Instagram photos since she was born. Despite all the foregoing, it appears Mr. Hayes will risk his life, get the second injection to keep his job, and provide for his daughter.

“After experiencing all of this and causing me so much discomfort and pain, I’ll have to put myself at risk again and possibly the risk of getting myocarditis again and get the 2nd jab just to keep my job and provide for my child.”

Mr. Hayes made clear that he “is not anti-vax,” but is instead pro-choice.