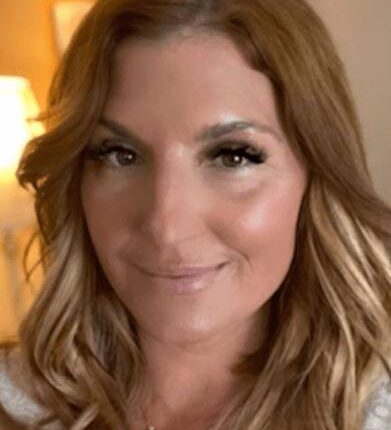 Despite all these preexisting conditions, Ms. Klamn received her first Moderna mRNA injection on May 14, according to her Facebook page.

It was apparently a family event. Her 4-year-old son received vaccines on May 13, the day before Ms. Klamn received the Moderna injection. The man in the photo is named Chris, who is Ms. Klamn’s boyfriend.

She reported losing a total of 24 pounds by August 23, in hopes of mitigating her chronic pain. Ms. Klamn also posted several photos of her and Chris out on dates, and “family photos” of all three of them, over the summer. She also referred to Chris as her son’s dad at least three times in Facebook posts. Her summer appeared to be all peaches, cream and vacations based on Facebook posts. But social media is not reality, as she soon revealed.

Ms. Klamn posted a call for people to donate blood on August 28. It seemed a bit out of the ordinary based on her post history.

That same day, she posted an article about Pfizer mRNA injections causing Bell’s Palsy. She also hinted that she suffered adverse effects from her own Moderna injections.

She became more and more defiant thereafter. Ms. Klamn reported having a blood transfusion on September 3 and spoke her mind about the Centers for Disease Control and other billionaire-controlled organizations.

She finally revealed the full truth on October 7. Her doctor diagnosed her with hemolytic anemia, an autoimmune disorder that causes your body to recognize red blood cells as pathogens, and thus destroys them. That is why she needed the blood transfusion a couple weeks earlier. She was also diagnosed with macrocytic anemia, a condition that causes red blood cells to grow larger than they should be.

Doctors told Ms. Klamn that both conditions were caused by the Moderna mRNA injections.

She’s “felt like death” for two months, but said she uses spray tans and happy photos to push through.

Ms. Klamn is accepting the fact that more blood transfusions are forthcoming, and that this is likely her new normal, in addition to all the spinal injections. Now she wishes she never received the Moderna injections.