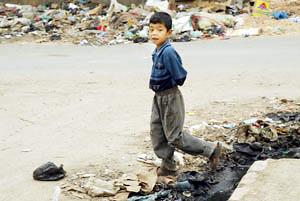 By Nasir Kadhim and Salam Nasir

BAGHDAD, Iraq, May 25, 2005 (ENS) – Cholera is spreading in Baghdad’s impoverished al-Amil quarter where overcrowding and contaminated water are leading to fears of an epidemic. City officials blame insurgent attacks on infrastructure for the outbreak in southwest Baghdad.

Children have so far been the worse affected, with one doctor at a Baghdad hospital saying he is now seeing young cholera patients on a daily basis.

Nadia Shawkat was in line at the Central Children’s Hospital waiting for a doctor to treat her daughter.

“My only baby girl has cholera, and the reason is water pollution, as the physician confirmed,” she said.

To prevent a further outbreak, Imad Hassoon, a pediatrician at the Central Children’s Hospital, has been advising parents to keep their children off the streets.

But in this poor and crowded area of southwestern Baghdad, children like four year old Allawi continue to play around stagnant pools of dirty water, despite the danger.

“We don’t care about this dirt and water any more because we’ve got used to it,” he said.

Residents have complained about the health problems, urging city officials to do a better job maintaining water pipelines and sewer systems.

Doctors told Hamza Rasheed that his three year old son got cholera from polluted tap water, but his complaints to the municipality and the Baghdad governorate have been largely ignored.

“The situation has stayed as it was, with an increase in the number of children getting this disease,” Rasheed said.

Ali Salman, al-Qadisiyyah district’s water project manager, blamed insurgent attacks for Baghdad’s dirty water. He said that although large amounts of water are purified every day, the increase in attacks on distribution systems is having “a negative affect on the water quality.”

Truck driver Hatam Dawud used to transport chlorine and other water purification products from Basra to Baghdad, but the recent violence has prevented him from doing his work.

“Because a driver was killed on the road a month ago, now I don’t carry these materials,” he said.

Salman Jabir, an engineer in the water and sewage department of al-Amil, believes that if the security situation improves, so will the water supply.

“I wonder what water and the sewage system have to do with politics, the government and the U.S. forces?” he asked. “Why are the extremists preventing us from reconstructing our country for the sake of our innocent children?”

{Published in cooperation with the Institute for War and Peace Reporting.}