Other Fires in Steel-Structure Buildings 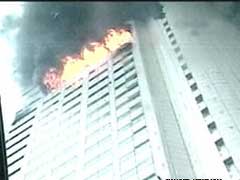 WTC1, WTC2 and WTC7 are the only steel-structure buildings ever to have collapsed (allegedly) as a result of fire.

There are several cases of fires in other such buildings, none of which collapsed.

It is not well-known that WTC1 itself survived a serious fire in 1975. It started on the 11th floor and spread to six other floors, burning for three hours. For more details see The World Trade Center Fires (Not So Hot eh?). How come WTC1 survived a 3-hour fire in 1975 but completely collapsed as the (alleged) result of a fire lasting less than two hours on 9/11?

In response to this question one reader wrote:

I would submit that none of the other buildings were hit by a heavy aircraft moving at 500 miles per hour, which sheared off many beams, support structures, etc. The shock to the tower must have been tremendous! Isn’t this obvious?

“Ah, but none of the buildings mentioned above were struck by a 390,000 pound aircraft traveling at 350+ m.p.h.” Well, each of the Twin Towers was still standing 50 minutes after being hit, so it was not the impacts which caused them to collapse. “Ah, but the intense heat of the burning jet fuel!” Actually, according to NIST’s chief WTC-investigator the jet fuel burnt itself out in less than ten minutes. Don’t believe it? Read through Reply to Popular Mechanics re 9/11: Claim #6. Then go to the top and read it all. Then follow the links to other articles on this website showing that the official story is bogus. Then follow the links to the many other websites which demonstrate that 9/11 was an inside job. Too busy? Oh, well, then, if you don’t care to know what really happened on 9/11 …

What you have heard ever since 9/11 on network TV and in the mainstream media such as the New York Times and all the other corporate-controlled newspapers is simply the official story, repeated over and over, on the assumption that if a lie is repeated often enough then people will believe it. Especially if it is a big lie. The idea that elements of the US government were responsible for planning and carrying out acts which killed about 3000 people is so outrageous that most people (most Americans, at least) reject it reflexively. But it is precisely because it is so outrageous that the perps assumed that no-one except a few fringe thinkers would ever take it seriously, and that they would get away with this act of mass murder. What they didn’t count on was that thousands of websites would minutely examine the evidence available (such evidence as was left, mainly photographic, after New York Mayor Giuliani ordered every scrap of physical evidence removed from the WTC site as quickly as possible, with nothing but a token forensic examination, and shipped overseas to be melted down in blast furnaces).

An examination of the evidence which remains leads inexorably to the conclusion that 9/11 was an inside job, perpetrated by elements within the US government (probably going back before Bush came to power in 2001) in order to justify US military aggression against any country which stands in the way of its aim of global economic, financial and political domination. Maybe you think that the deaths of 100,000 Iraqis, the bombing of any country that the US chooses to bomb, thousands of deaths and injuries among US soldiers, and the contempt of all other countries for the US, are worth it to maintain US global domination; but what about the mass murder of around 3000 people, mostly US citizens, in New York City on 9/11? A small price to pay? This website presents much of the evidence that elements within the US government carried out this atrocity, and there are also many other websites which do so. If you can read then there is now no excuse to plead ignorance.

A copy of the entire Serendipity website is available on CD-ROM.