Ms. Desirée Penrod said on Facebook that she received the “Janssen dose” on or around March 9. Janssen Pharmaceuticals is the drug division of Johnson & Johnson, and developed the JNJ-78436735 viral vector shot. It is marketed as the one-dose vaccine.

The 25-year-old educator said she felt no adverse effects the first day of the shot. But she said the “vaccine is killing me today” on March 10. 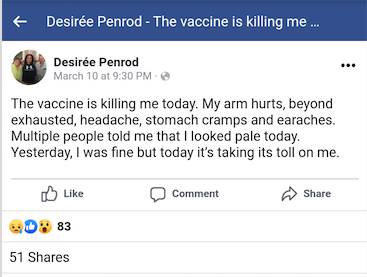 She engaged with several people who commented on her post that day. Ms. Penrod said the shots were offered to her through the Killingly School District in Danielson, Connecticut. She worked at Killingly Memorial School, which serves grades 2 to 4. Ms. Penrod thanked several people for their concern and told others considering the shot, “no need to be nervous.” Another person commented, “[the symptoms] lasted two days for me, then voila it was gone.” Ms. Penrod responded that she had her fingers crossed that March 10 would be the last day of her symptoms and it “goes away.”

The next day she said she was feeling better “for the most part.” That was the last comment she made on Facebook. Ms. Penrod died on Wednesday, March 17, becoming the youngest victim this blog has covered for all of the experimental shots.
Her wake is this Wednesday, March 24 from 5 p.m. to 7 p.m. at Gagnon and Costello Funeral Home in Danielson.