A three-time Enduro National title winner and professional mountain biker has had his life and career ruined by Pfizer’s Covid-19 vaccine. 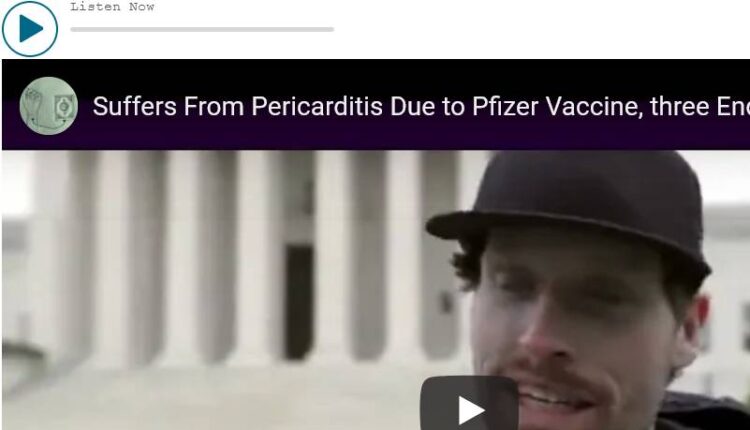 Kyle Warner, 29, recently spoke out about how his health was destroyed by the covid jabs, leaving him with pericarditis, Postural tachycardia syndrome (PoTS) and reactive arthritis.

Due to this, Warner’s career is now over.

In an Instagram post, Warner wrote: “Thanks to everyone that has been supportive and understanding of me speaking out on this issue. Many of you know me as a pretty reasonable and caring guy and I never intended to be a part of this whole conversation.”

“However after my experience this summer, and listening to literally thousands of similar stories I feel like I need to stand up for the people who either cannot or don’t have access to the same platform.”

Warner emphasised that his injuries are not political. He said that they are personal because they are real and have ruined his life.

“I want the best for the world and for humanity and it breaks my heart to see people suffering in any way,” he said.

“This past week in D.C. shook my view of the world drastically, and it made me realise how much we as average human beings need to come together and advocate for one another.”

He urged his followers to listen to his story and other people’s experiences “before judging or labelling.” He said that he is just an average dude “who cares about others and wants the government to acknowledge and support what’s actually happening.”

The worst of Warner’s symptoms emerged after his second dose of the Pfizer vaccine, which caused him to develop numerous serious chronic illnesses from which he continues to suffer.

In an interview with Dr John Campbell earlier this year, Warner explained how he felt immediately after his second jab.

“As soon as they injected it, I had a weird metallic saline taste in my mouth. I asked the guy, ‘Is that normal?’ and he said no, they don’t hear of that much,” Warner revealed.

“The fact that the clinician doesn’t recognise that a metallic taste in the mouth could be a sign of an inadvertent intravascular administration concerns me because what happens is if the vaccine goes into your muscle, then it stays in your muscle, and it’s going to take half an hour to be systemically absorbed at all, or much longer than that.”

He explained that if a vaccine’s contents get dispensed into a blood vessel, a metallic taste comes on almost immediately. The fact that this happened to Warner made him believe that the Pfizer jab was dispensed into his veins.

He said: “Basically, you’re having the inflammatory reaction in your heart and in your joints instead of in your arm.”

Soon after this, Warner developed strange reactions in his heart, including an accelerated heart rate. Warner observed this because tracking his heart rate is part of how he keeps fit for mountain biking.

Sadly, the only reason Warner got the vaccine is because he wants to continue travelling internationally. Had there not been a mandate in place, he would not have taken the jab at all.

Recently, Warner travelled to Washington, D.C., to participate in a conference about Covid injection adverse effects, which are being systematically ignored by government officials.