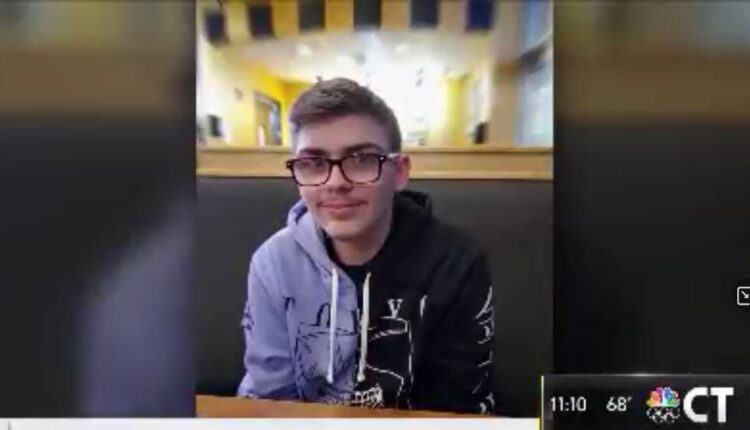 Connecticut resident Rachel Hatton’s 17-year-old son was diagnosed with a serious heart condition just days after he received his second dose of the Covid-19 vaccine.

She said that Gregory began complaining of severe chest pains three days after his second dose of the vaccine, and on the fourth day his condition began to deteriorate further and he started experiencing back pain as well.

Gregory then went to a walk-in clinic where they ran blood work and did an X-ray, where they discovered that he had pericarditis – an inflammation of the lining outside the heart.

He was then transferred to Saint Mary’s Hospital in Waterbury and then to Connecticut Children’s in Hartford for further treatment as health officials were puzzled as to the cause of the condition.

Rachael Hatton, said: “They hooked him up to a heart monitor, did more EKGs (electrocardiograms), echocardiograms.”

“Infectious disease actually came and ran their own set of blood work to try to figure out if it could have been caused by something else, some sort of infection, something else, like Lyme disease. They tested him for all sorts of things and one by one those tests came back negative.”

Health experts were unable to determine whether the Covid-19 vaccine was responsible for the development of the condition, but they called Gregory back in after two more patients displayed similar symptoms.

At least 18 teens and young adults in Connecticut have shown symptoms of heart problems post-injection of the Covid-19 vaccine, the health commissioner, Dr. Deirdre Gifford said in a press conference on 24th May.

A spokesperson from Connecticut Children’s said patients have been admitted to the hospital with both pericarditis and myocarditis, which is the inflammation of the heart muscle.

Hatton said that she is sick with worry about her son Gregory and is unable to sleep as he is now out of work, on medication, and hooked up to a heart monitor.

“If I hear my son sneeze or if he sounds like he’s out of breath when I call him on my break at work, I get nervous because I just don’t know what else could happen. He basically has a heart condition now and it’s terrifying.”

Hatton said she is sharing her son’s story to raise awareness of the condition, which whilst doctors say is rare, it does not feel rare to parents whose children are suffering from it.

“I just want people to be aware and be more informed because now they want to give this vaccine to younger and younger children and it’s terrifying. I wouldn’t want any other parent to go through what we’ve been through.”

The vaccine has raised concerns amongst many parents as younger children are being encouraged to get the jab, arguing that children are too young to be inoculated with experimental vaccines.

“With that age group, we did have a little bit of concern because they are still growing,” Karn Collard told NBC Connecticut.

Currently, in the UK, people aged 30 have been invited to attend vaccination appointments, but it was recently announced yesterday that the Pfizer vaccine has been approved for 12- to 15-year-olds.

Despite health officials stating that the Covid vaccine is not to blame for causing serious illness, it is hard to ignore the countless innocent victims who find themselves having severe adverse reactions only days later.